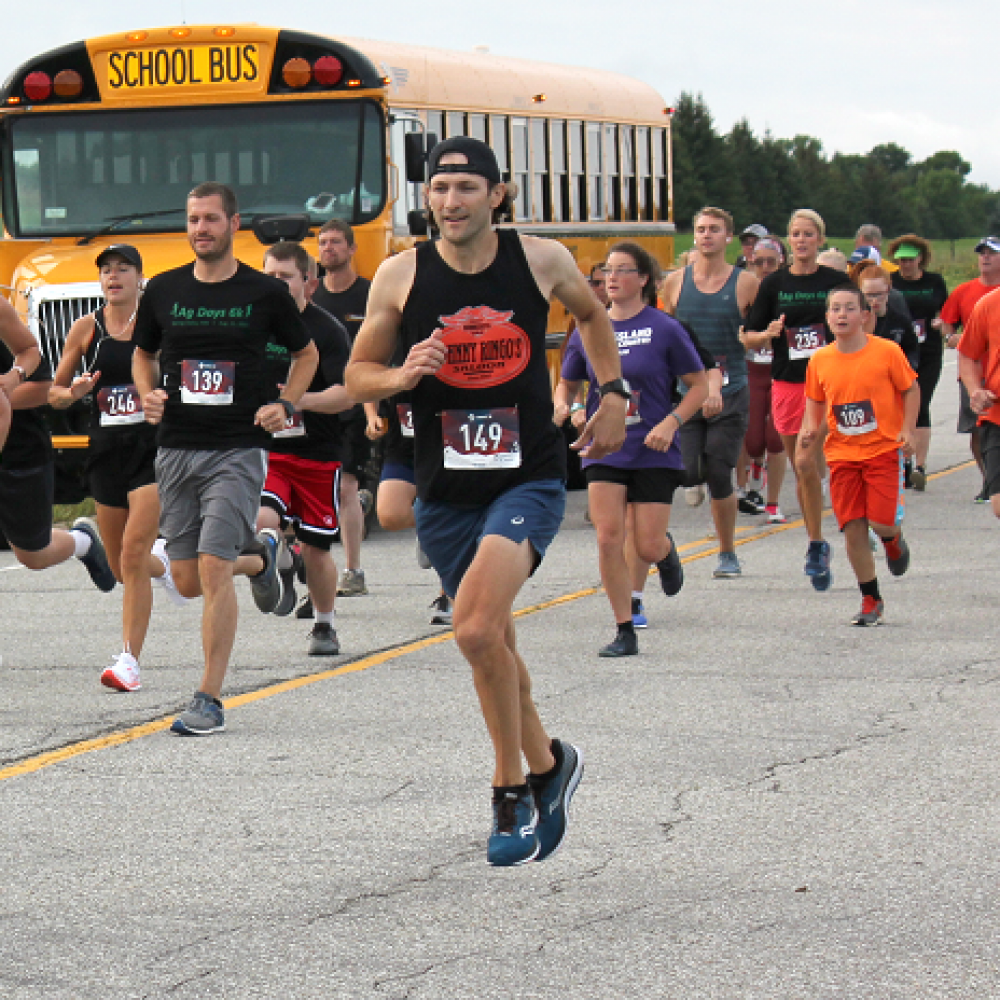 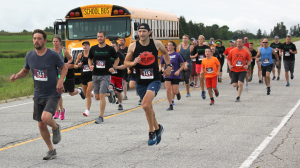 The first female across the finish line was Jenna Steeves, 32, of Milford, Connecticut, with a time of 27:12.  She is the daughter of Steve Tammel, who volunteered to drive the bus full of runners to the starting line. Steeves was also the female winner in 2018, the last time she ran the local race.

A teen winner is a repeat of the last Ag Days 6k trail race. The Ag Days race wasn’t held in 2020 due to the pandemic. In 2019, Treyton Lanning, 14, of Chatfield, became the youngest ever winner of the race, which became a 6k race on the trail in 2013. Previously the race was 5k in length and the course was on roads in Spring Valley, starting at Spring Creek Park.

Since then, the race has started on County Road 8 near the city camping area with runners heading onto the paved trail and following it all the way to Willow Park. The course is 3.72 miles long.

Kruegel previously played football in the fall, but last season he was allowed to play football and run cross-country for Kingsland. This year, he is focusing solely on cross-country. However, in cross-country meets this year, Hubka is usually the one in front of the Kingsland High School cross-country team. At a Hayfield invitational meet Sept. 9, Hubka took first and Kruegel finished second overall in a field of a dozen teams.

A total of 49 runners signed up for the 2021 race. There were plenty of young runners as 16 of them, or nearly a third, were age 18 or younger. The field even included a 9-year-old, Carson Smith of Spring Valley. Every age group was represented up to the 60s, which included three women older than 60.

Age group medal winners, not including the overall winners, are as follows: 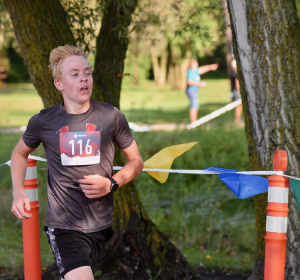 Youth 14 and younger: Dalton Pischke of Elkton and Kylie Meyer of Spring Valley.

Age 19 and under: Imm and Susan Mettler of Spring Valley.

Age 30 to 39: Dan Hershberger and Heather Betts, both of Spring Valley.

Age 40 to 49: Nils Wahlander and Angela Boysen, both of Spring Valley.

Age 50 to 59: Bruce Meyer and Sarah Kohn, both of Spring Valley.

Age 60 to 69: Sharon McGill of Stewartville.

Volunteers included Dave and Marlene Foster at the finish line, Kristi Mettler at the registration table, and Brenda and Matt Stier and Pam Phillips at the aid station. Tammel also officially started the runners and the Kingsland School District provided a bus to transport the runners from Willow Park to the starting line.

Next year’s race will be held Saturday, Aug. 20, with plans to run the same course. Any suggestions for improvement are welcome.  Also, don’t forget the Frozen Feet 4k during Christmas on Historic Broadway Avenue on Dec. 11. This is a fun run that supports Kingsland youth football. 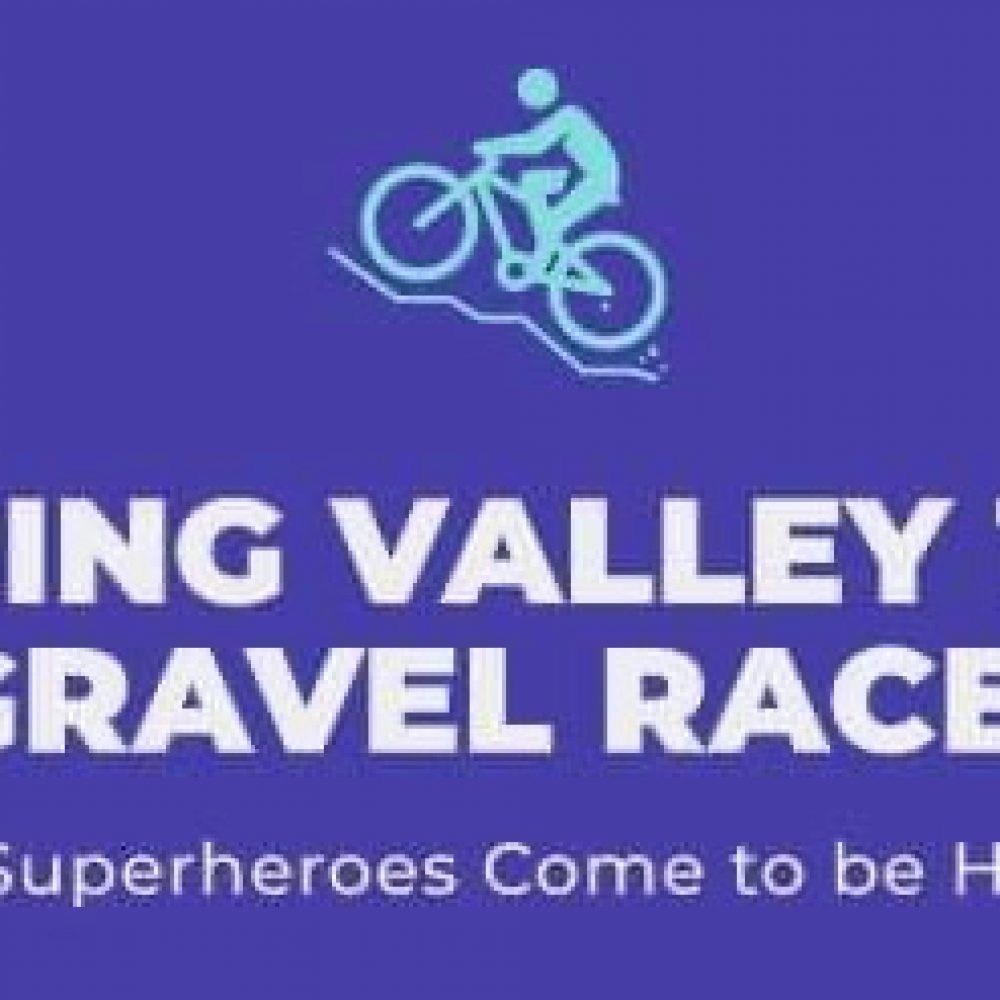 Greetings all, the SV100 Gravel Bike Race is upon us!

The weather-guessers are predicting a hot one so the Tri-Chairs have decided to toe the line slightly when emphasizing the golden rule of self-supported.  We can’t help it, but when you, us and our city residents expressed concerns over the forecast for Saturday, we’ve redirected some of our volunteers to setting up some reasonable-person principled water-stations, just in case you miscalculated the self-supported rationing you planned for the day.

What does this mean:

It means that the finish line timing table will be unmanned for some of the later afternoon time slots due to the redirecting of limited number of volunteers above…but we can, and have overcome this challenge successfully in the past; when you hit the finish line, if there is no one at the table, take note of the time on the official clock and write it on the race roster on the table, or better yet, grab a refreshment from under the table and take times for a few minutes while cheering on fellow finishers…drop the mic, issue resolved, thank you for your teamwork.

You are responsible for you, so please don’t change your self-supported plan based on the above, but know that the tri-chairs and community have you on their minds. Please keep a watchful eye on one another, and have a great time.  We are looking forward to your arrival and participation in the SV100. Safe travels, Tri-Chairs.

Rollout remains at 8:00 AM, and we look forward to seeing you all! 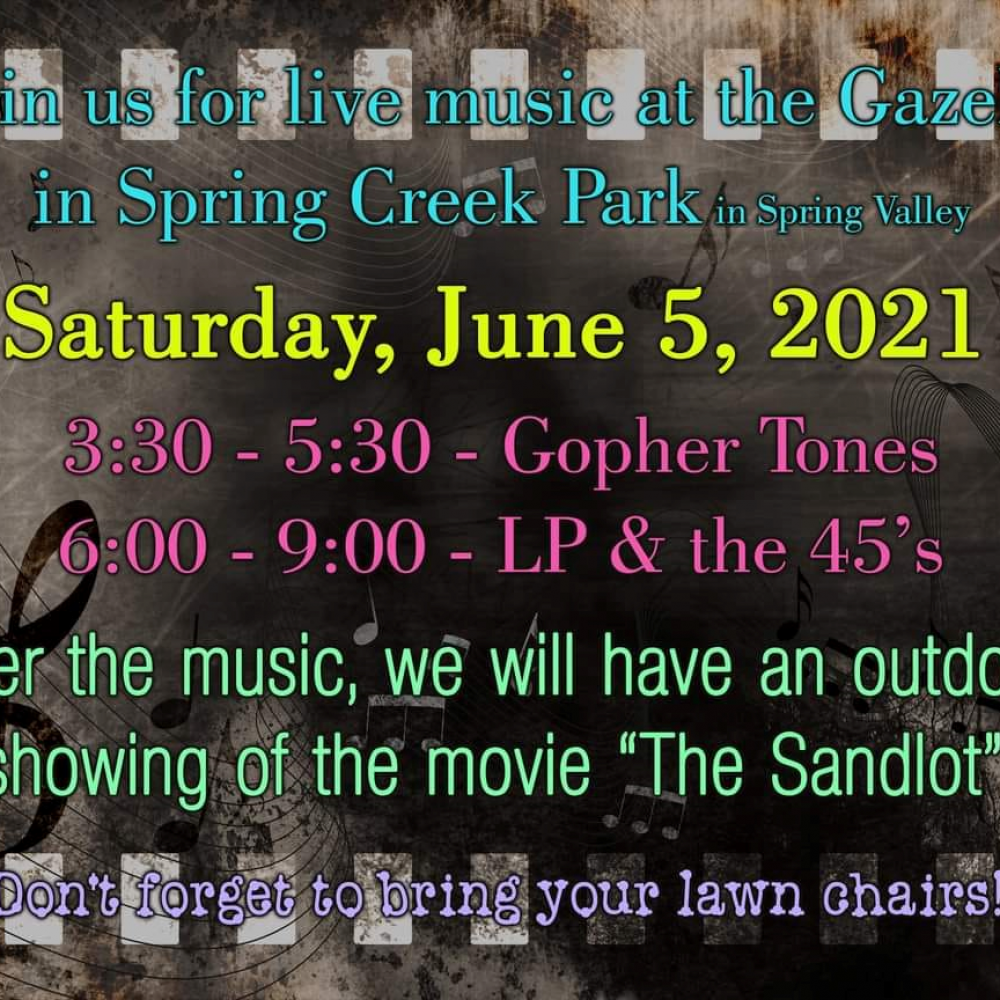 While your calendars are marked for the Spring Valley 100 on June 5th, and the celebrated “grandaddy” of all gravel race courses, please add a mark in your activity calendar for after the race. All are invited and encouraged to pull up your zero gravity chairs and relax in Spring Creek Park, just 4 blocks from the race finish, and listen to live music (free), refuel from onsite food vendors($), and watch an outdoor classic “Sandlot” (free).  Lupulin Brewing Company out of Big Lake, MN will be pouring brews($) in the park too (sponsored by the SV VFW), with all proceeds benefitting Never Surrender, Inc – Black Woods Blizzard Tour, the worlds largest snowmobile fundraising event to help defeat ALS, Lou Gehrig’s disease. Please consider joining fellow riders at the Music-in-the-Park afterglow event. We are looking forward to meeting you at the registration, start, finish… or by the beer tent. Cheers!

Put some rocket sauce on that drive train and let’s get ready to rally in the valley! 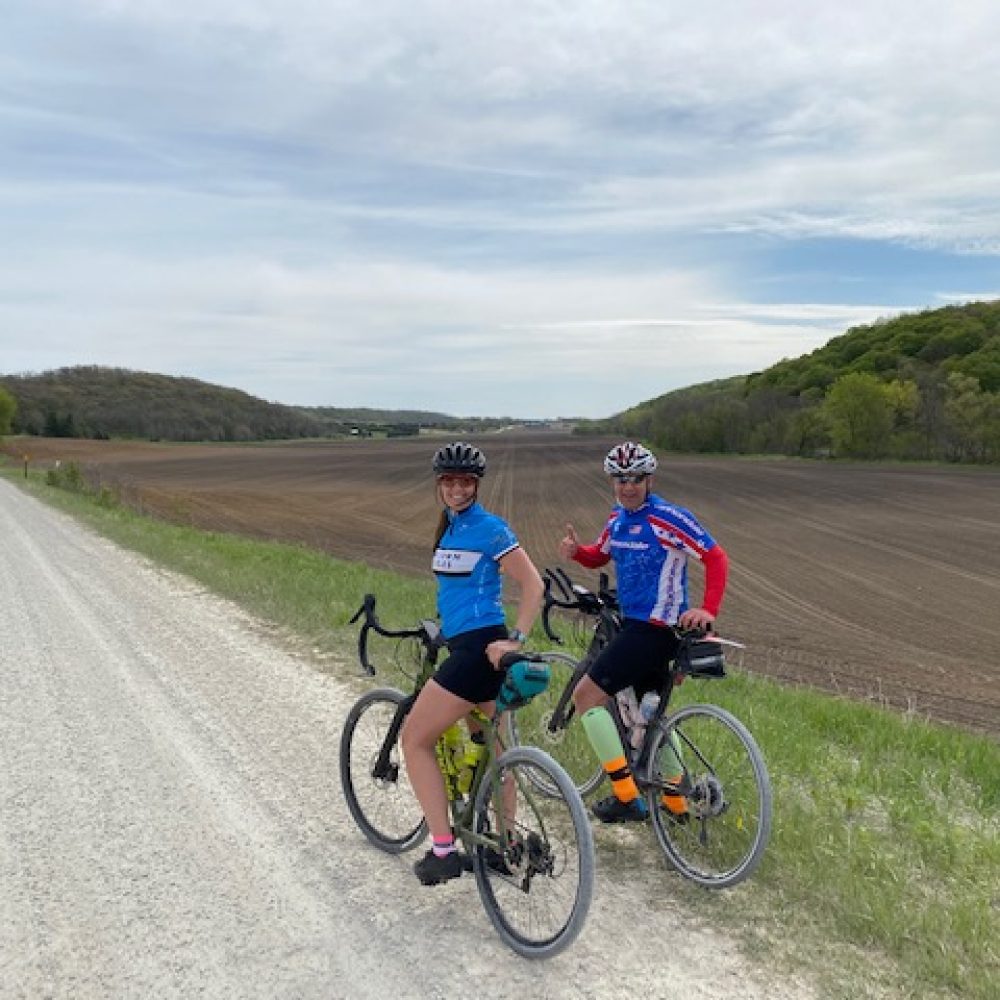 On our most recent 75-mile (windy and uphill, both ways of course) training ride on the SV100 route, it was obvious that townships throughout the area have been busy spreading miles and miles of “fluffy” off-white gravel for all to enjoy. Equipment suggestion: Check your tires n tubes, and check ‘em twice, as Hero Gravel will be the exception this year. The abundance of gravel reminded me of the first rider tip exclaimed to me by a fellow rider during my first gravel race, the 2015 edition on the historic route. His tip came as We were navigating a tight left-hand turn at the bottom of a downhill where I found myself being sucked into a windrow of gravel that tossed me to the shoulder and brought me to an abrupt stop seconds after racing elbow-to-elbow with a large group of fellow riders: “steer where you are and not where you’re going!”; advice I will never forget. If you are planning to join us and you haven’t registered yet, please take some time to do so in advance, it’ll help with bib distro by our volunteers the night before and morning of the event. Did I just say bib numbers at a free race? But of course, who wouldn’t like some wall art to add to their collection as a reminder of one of the most epic 100-mile gravel races on two wheels. We are looking forward to your arrival. Safe travels. 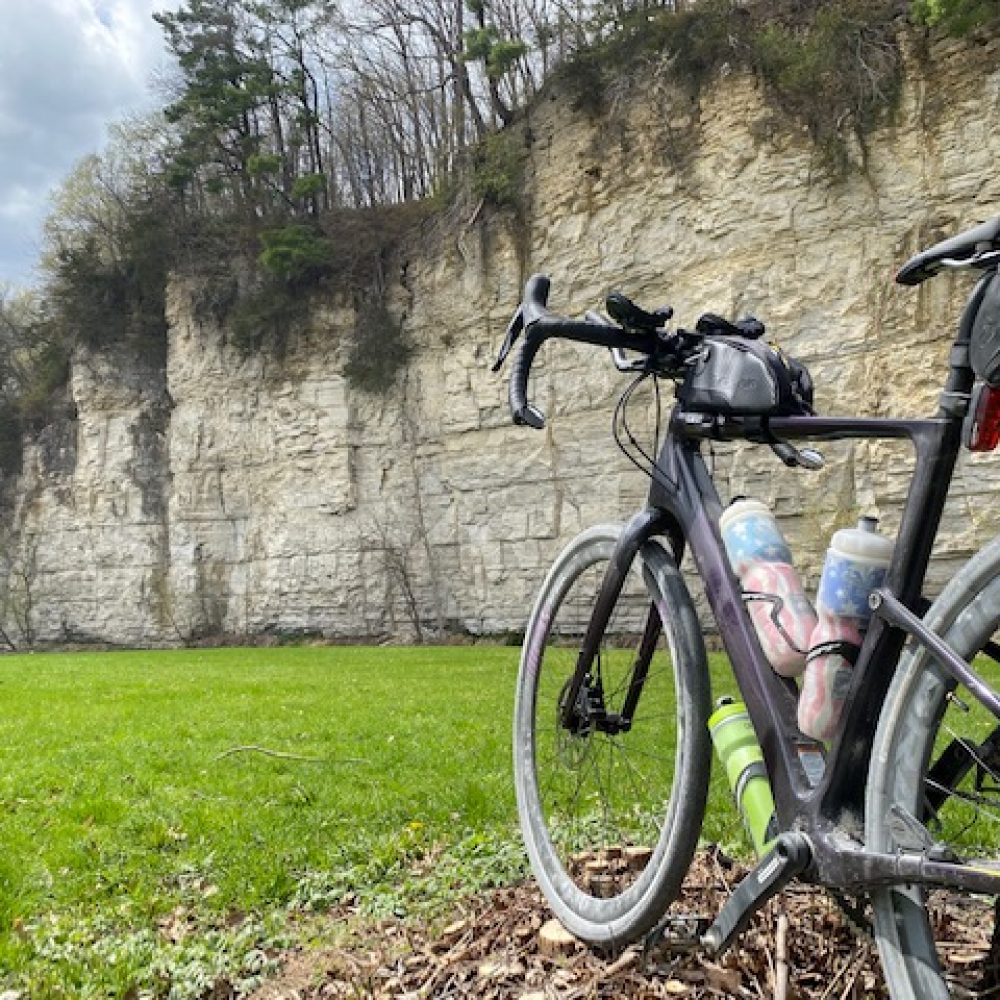 As race day fast approaches, this photo, taken recently at Masonic Park, reminds me to remind you that Spring Valley Minnesota is where “The Prairies meet the Bluffs.” Prairies to the west and Bluff Country to the east… the entire route, less start and finish, is east of the City of Spring Valley, who doesn’t love a good hill climb… or 21? When your epic SV100 journey takes you to the majestic bluff pictured, you can get ready to celebrate your personal victory as this bluff marks the base of the last major hill climb of the day. As always, we are looking forward to seeing you at the SV100 Start Line on the 5th of June, 8 a.m… bring a friend. Cheers!