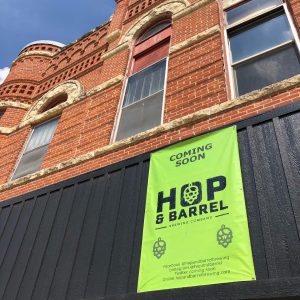 Hop & Barrel Brewing Company of Hudson, WI, will be opening a second brewery in Spring Valley this Fall!  Hop & Barrel announced its expansion via social media this past weekend upon securing the downtown Spring Valley location, on the corner of Broadway and East Jefferson St., formerly home to Sheldon Plumbing and Heating.

“We like to say that Hop and Barrel is a community center that sells beer,” say co-founders Justin Terbeest and Brian Priefer. “Hop & Barrel Spring Valley will have its own unique character,” adds Terbeest, “but the underlying theme will be a community center with beer.”

Hop & Barrel, established in 2017 in Hudson, WI, has become well known for its unique craft beers and its ability to offer a fun, family-friendly place to relax with friends and meet new people. It regularly hosts various events, including live music, stand-up comedy, trivia & game nights, and brewery tours for those who want to learn more about the brewing process.

“Spring Valley is a location that we had explored before,” explains Terbeest, a Spring Valley native, sharing that he and Priefer had looked at properties downtown several years ago for a different beer project that ultimately didn’t happen. Earlier this year, when friends and fellow Spring Valley business owners Alex and Jenn Slifka presented the opportunity of opening a brewery in a building that they planned to purchase, it made perfect sense. “We don’t have a traditional business partnership with them,” says Terbeest, “but we have worked very closely with them to secure the space as soon as it was available.”

When asked about why Spring Valley makes sense for another location, Terbeest explains that while some people may feel that Spring Valley is a community where people grow up and eventually move elsewhere, he is quick to points out that there is great opportunity in a small town with affordable property and a great story to tell.  For the growing craft beer industry, there is highway of tourist that travel between the Twin Cities and Decorah, IA, and it is easy to add stops along that route.  “Spring Valley has always been on the main travel route, but now, instead of car service and scenic stops, it’s now craft beer and boutique shops,” says Terbeest.  It’s really just Spring Valley staying current with the times,” adds Priefer.

For Terbeest and Priefer, Hop & Barrel Spring Valley is their way of helping to revitalize the community, bring people together, and contribute to the local economy, noting that these can all be achieved at the same time. “People don’t often realize what can be accomplished when community’s come together; getting everyone in the same room together is very powerful,” states Priefer.  With that in mind, a traditional U-shaped bar will be focal point of the new bar space, allowing people to meet face-to-face, tell stories, share ideas and of course, a craft beer of their choosing.

While Hop & Barrel Spring Valley will certainly offer some of the brands flagship craft brews, such as “Minnesconsin”  Light Lager and “Space Force”  Double IPA, the focus will be on creating new, local craft beers that connect with beer lovers both locally and those passing through and exploring all the area has to offer.  Hop & Barrel is also well-established with area beer distributors, so many of its craft beers are already available through central Minnesota and northeastern Wisconsin.

“There is definitely excitement around town,” says Spring Valley EDA Director Chris Hahn. “We have Stellar 181 Taphouse opening later this July, now a new brewery just across the street later this Fall, and some great existing options for food and shopping downtown. Spring Valley is becoming a destination for people to gather, have fun and be part of our story!”

To learn more about Hop & Barrel Brewing Company, visit hopandbarrelbrewing.com and make sure to follow the progress on Facebook at @hopandbarrelspringvalleymn.